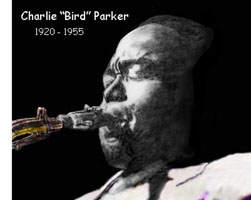 This page displays some examples of the various types of Art I have enjoyed creating over the years. I don't recall ever taking any formal art classes in school but that was primarily because I was so preoccupied with music. There are many side-interests I have pursued despite a lack of formal training. For instance, I never took any shop classes in school but have done woodworking all my life. I'm very much a self-starter. If I want to know something I enjoy doing my own research, exploration, and learning. I dig deeply into subjects that interest me. If an activity is both creative and entertaining, I will probably like it. Art happens to be both.

Art (in the form of pencil sketches, charcoal and pastel sketches, cartoons, caricatures, and paintings) has been a hobby of mine from when I was a very young child. I was captivated by the (now mostly forgotten) Jon Gnagy TV show and his "Learn to Draw" kits. I was always sketching something. My father even built a back-lit, glass surface animation table for me when I was about 10 years old to experiment with animation techniques similar to what I had seen used by Disney. Now, there's a great dad! It's an excellent example of the kind of parental support I always received as a child in both Art and Music.

Odd fact: When I was in the 2nd grade my teacher (Mrs. Nishimori) apparently liked one of my drawings so well that she sent it to the Art Department of the University of Washington. They wrote back a terse little note saying something similar to: "It's very nice. What do you want us to do about it? The kid's in the 2nd grade." Their reply had two effects: They missed the golden opportunity to establish the University's first daycare center and their Professor of Crayons Ph.D. was livid at the condescension expressed in the reply! After all, I could have been a nascent Pablum Picasso! I have no idea what that drawing was but I think I titled it "Twizzlers' Mother." Must have been a study in red.

My Art hobby has sometimes worked its way into business in the form of cover art for CDs - mine and others (usually clients of the studio.) Some covers were done as jokes too, which can be seen on the Compendium of the Strange and Unusual page of this site. Well, truth be told, almost everything I have ever done was eventually hijacked for humor - another despicable character flaw of mine, which I have diligently and meticulously suppressed for this sober and staid websi . . . oh, never mind. I'm including a small cross section of the various types of Art I have practiced from when I was about 5 years old to the present. Nothing profound, just fun. Hey, that would be a good epitaph for my grave - "Here lies Tom Hopkins - nothing profound, just fun. Well, not any more! Ba-dump-bump!" 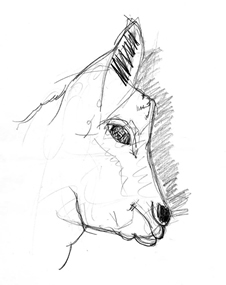 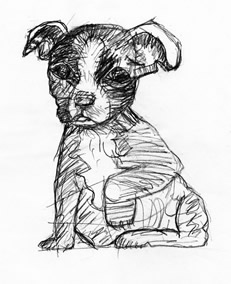 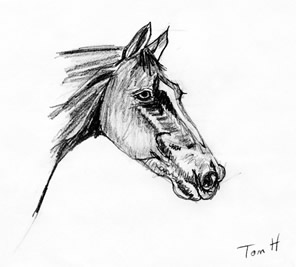 Above are three pencil sketches. The lamb, I think, was in response to a "can you draw?" test in a newspaper or magazine. The middle sketch is of "Pix," our Boston Terrier puppy, and the horse head wishes to remain anonymous. I was 8 and 9 years old at the time these three were drawn. 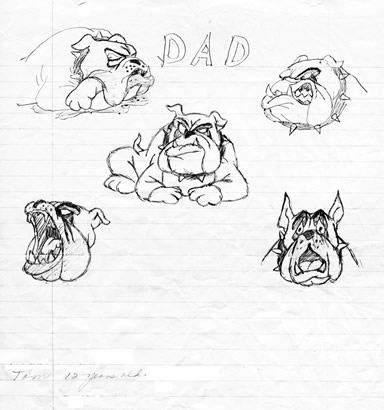 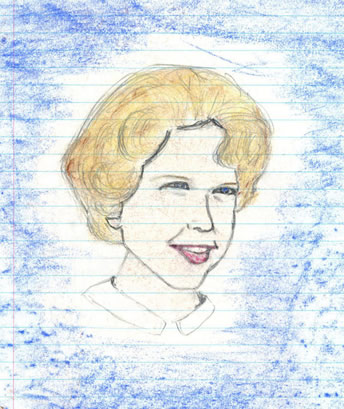 The cartoon above on the left was a gag gift given to my father on his Birthday when I was 12 years old. Fortunately, my mother labeled and saved the drawing. The picture on the right is a portrait of a friend done in pencil and pastels. Both of these drawings used the time-honored medium of lined school paper pioneered by Leonardo da Vinci in 1462 as he slipped his best pickup lines on paper notes to cute little Mona Lisa occupying the chair in front of him in school. Anyway, I drew many portraits of family and friends back then (the 1960s, not the 1460s) and this particular portrait was drawn free-hand using a photograph as a reference with the pastels added afterward. 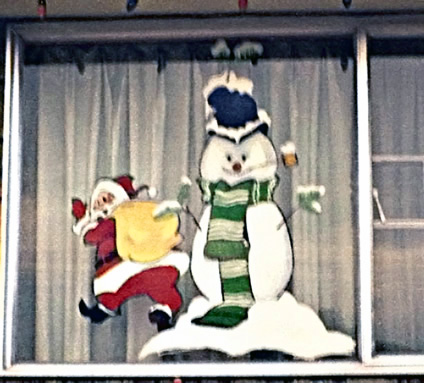 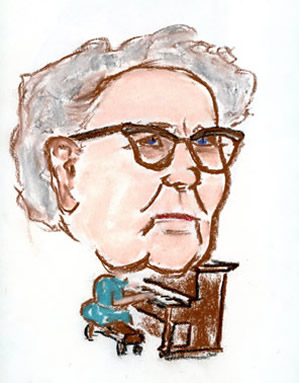 Almost every Christmas from about the 3rd grade on I would use poster paints to add a seasonal cartoon to the living room window. This one was done when I was 16. I also filled art tablets with caricatures of friends, relatives, and celebrities. The pastel caricature on the right is of my grandmother. She was a pretty good piano player but never let it go to her head - all evidence to the contrary.

In the 80s I created a mural-sized two piece painting. It was a combination free hand pencil on gesso and acrylic painting of five of my favorite dead jazz musicians (there's nothing like being a dead jazz musician!) From left to right they were Art Tatum, Fats Navarro, Charlie Parker, Clifford Brown, and John Coltrane. I used small photographs from various books as inspiration - single photos for some and a combination of photos for others as references. Unfortunately, this mural was a work I never found time to complete. A few years ago I put the painting into storage. I recently got the idea of finishing it in the computer using the tools available in software. I laid the two large sections of the drawing/painting out on the floor and photographed each of the individual musicians. The resultant graphic files were then downloaded to the computer where I completed work on each musician in software (primarily Adobe Photoshop Elements.) Everything was still done free hand, this time using a mouse. The portraits became mixed media works where I kept each of the elements (B&W pencil, acrylic paint, computer background and detail refinement) clearly visible in the final works. Quick notes to avoid confusion: I digitally modified the color of Coltrane's shirt in the final work from the original yellow paint to shades of blue (Trane! - a musician's joke.) Also, Tatum isn't visible in the above photo of the wall; he was on the far left. Charlie Parker occupied the center position and can be seen at the top of this page. Here are three of the completed portraits: 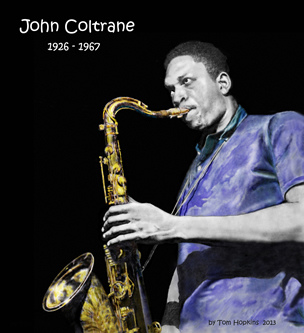 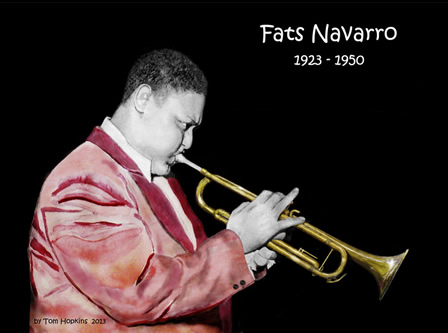 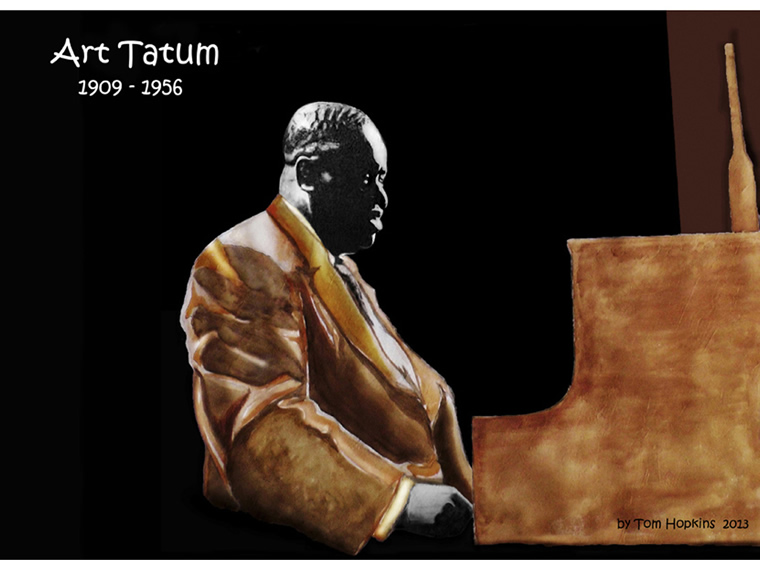 My work with abstract forms goes back to when I was just 5 years old as illustrated in the abstract with crayons below. I've used more than one medium for abstract works, from large wall paintings to stained glass. On the right is a three piece "stage depth" abstract acrylic painting done in 1982 as a backdrop for the speaker system. 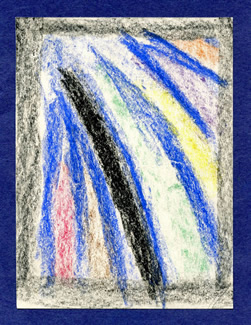 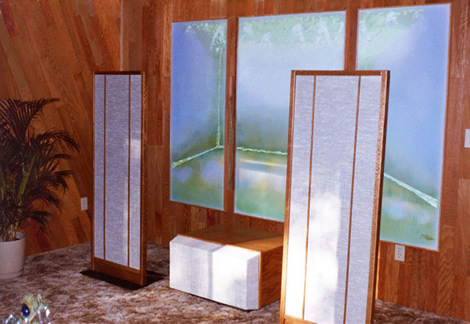 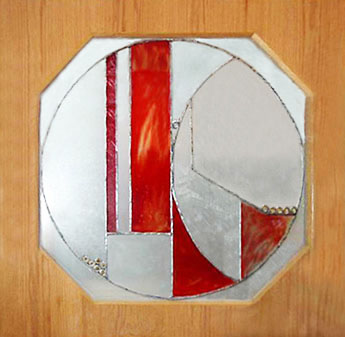 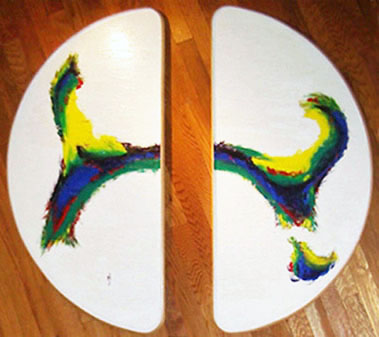 The stained glass window above on the left is from 1982 and was inspired by a stained glass style I saw in a magazine. The name of the original artist of that inspiring idea is lost to me now after 30 years. The two piece circular abstract on the right was painted with acrylics using paper towels instead of brushes to "feather" the strokes. It hung on the wall for 28 years from 1983 to 2011. It can be seen in some of the photos on the Vocal-Free Zone page of this site. 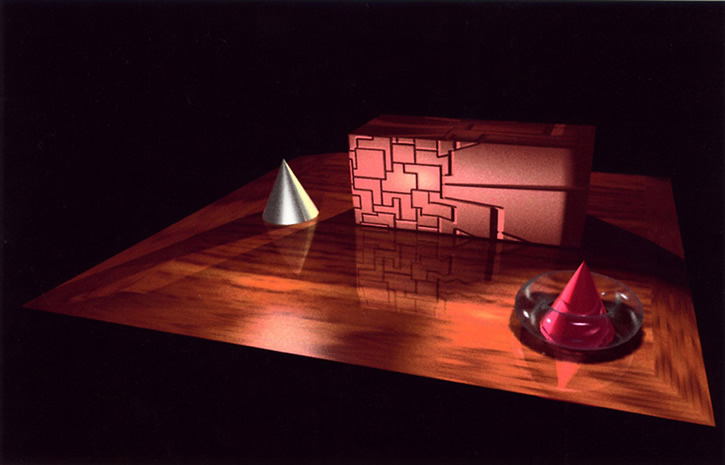 Above is one of the first entirely computer-generated art pieces I created in the mid '90s. It was a study in geometric shapes, materials, textures and lighting. It straddles the categories of abstraction and realism. I would suggest being careful about straddling the pointy objects in this one.

Below are several CD covers for various music projects. All but the first and last shown here used a thematic form to give them design consistency. These date from 1992 to 2001. The last one is the oldest. The first, "20th Century Pastiche," was a CD collection of my classical compositions, released in 1996. Examples from this CD can be heard on the Musical Compositions page. Music from "After Hours," "Bone Voyage," and "Altered Perspective" can also be heard there. The completion of these three recordings was interrupted by my becoming Director of Programming for the Garritan Corp. in 2001. Mike Jaap's "Healing Suite" was released in 1998. I handled the graphics and CD mastering chores on that one. The "Jazz Guys" CD was a collection of brief demo recordings for band promotional purposes. I did the recording, editing, CD mastering and graphics. Oh yes, and I played trombone on it too but I'll let that slide. Correction: It was a valve trombone. 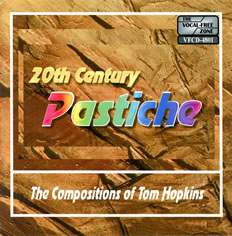 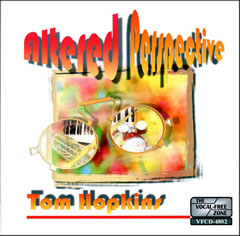 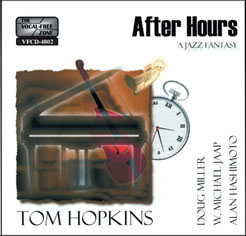 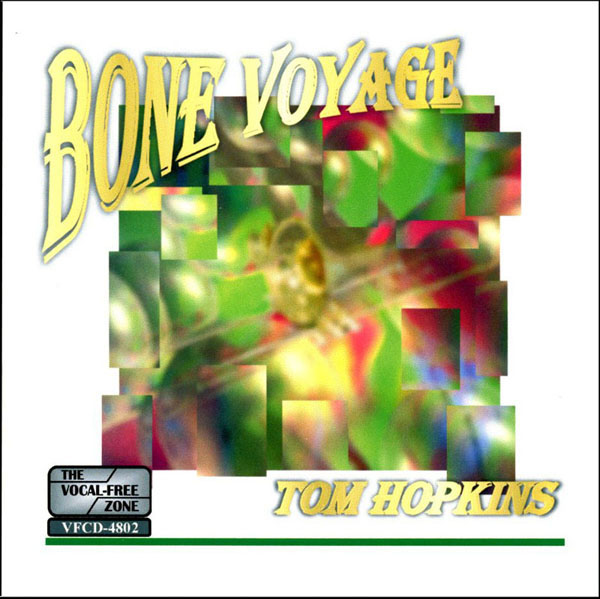 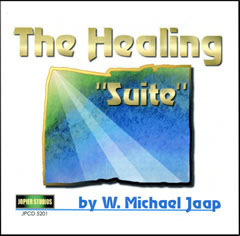 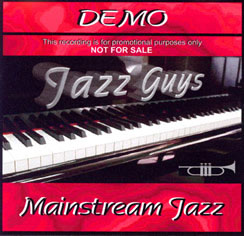