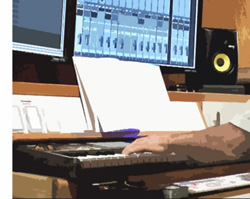 It wasn't until the early '80s and, especially, the introduction of MIDI that I began concentrating strongly on the areas of composition, arranging, and orchestration. This page is dedicated to the unfettered personal projects I managed to fit in between the commercial assignments I was doing. "Fettering" was reserved exclusively for commercial work. I received an attractive discount for large quantities of fettering and I kept it in an old shackle out back.

I relished the creative freedom to write anything I wished without the encumbrance of commercial considerations. The result being music which was, for me, both intellectually satisfying and, at the same time, utterly devoid of any commercial potential whatsoever! Not even a tiny bit. To its credit.

Below are links to a variety of examples of rather eclectic music I have composed, performed, programmed, and recorded for purely artistic reasons. Which highlights an important Art versus Craft distinction that I could expand upon at length . . . but your eyes would probably glaze over and you might start nodding off so let's just say: The music below is the Good Stuff and the fact that it didn't add much to my bank account was a small price to pay for the personal satisfaction its creation has engendered. These compositions represent some of my favorite musical accomplishments.

In comparison to the commercial projects I worked on, the following pieces are characterized by their far higher creative content and decidedly greater complexity while often imposing considerably higher demands upon the listener. They incorporate jazz and 20th century classical techniques such as polytonality, quartal harmonies, and occasional non-formal serialism while still remaining primarily tonal in nature. Improvisation sometimes plays a significant role. The categories below are fuzzy at best - lots of cross-pollination, which also happens to be the story of my life! The music was written and the recordings mixed between 1991 and the present using the technology available at the time of actual composition (with a great many modifications on my part.) "Technology available at the time of composition" usually meant Atari computer, C-Lab Notator software,and time code synchronization to two Akai DR4d hard disc recorders as described on the Vocal-Free Zone page for pieces prior to 1996. Exchange PC's using Emagic Logic in place of Atari/Notator from 1997 to 2002. Recent work was done on PC using Sonar software for both sequencing and audio. 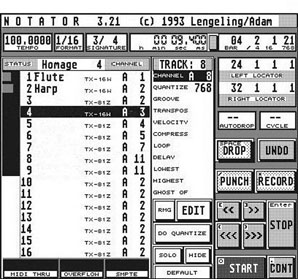 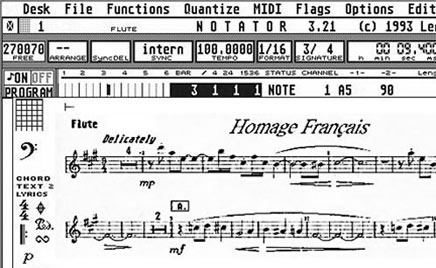 The above screenshots may look hideously primeval now but C-Lab's Notator (and later Logic) software for Atari was among the best available in the early 90s. I used it for all compositional chores. A portion of the track window is shown above. It was only capable of recording and editing the MIDI data, not audio. Audio was handled separately by the Akai DR4d machines using time code synchronization. It had a wonderful notation section which was really comfortable to work with for us old notation-based guys.

Most recordings combine live instruments with samples and I have identified the various musicians involved; see text and photos below. All instruments not identified as being played by another person were performed and/or programmed by me. Several of these pieces are from my 1996 CD of compositions entitled "20th Century Pastiche" which has been out of print for quite a long while now. The title link in that last sentence connects to a reproduction of the original CD booklet with detailed information on the project - far greater detail than is presented on this page. Almost all recordings below were created prior to my time with the Garritan Corporation and, accordingly, they do not employ any of the Garritan sounds I helped to develop, with the three exceptions being "Episodes for Cello and Piano," the organ piece "Organique," and the remix of "Miniature Waltz." Some of the pieces are complete while others are just excerpts. I intend to add more music to this page in the future. Watch any of the major national network news outlets for information on their release: "Next, following news on the latest war in the Middle East and the mass murders in 15 U.S. cities - Tom Hopkins has just posted a new piece of chamber music on his site!" I generally hate publicity but what can you do?

"Dreams of a Child - 1953" (1996) This ambitious composition is a programmatic piece that represents one particularly eventful night of dreaming for a small child in the year 1953. As such, it uses musical influences to which a child of that time would have been exposed - movies, TV, light classical, and popular music. It starts with falling asleep, then moves through different dreams, culminating in a "chase" nightmare, and gently ends safe in bed under the covers. Live instruments include Jim Coile on flute, Nancy Rumbel on oboe and English horn, Elizabeth Ward on French horn, Doug Miller on bass, Gary Gibson on snare drum, and myself on trumpet and valve trombone. Everything else is sampled and (mostly) custom programmed by me. The photo on the right shows (from top to bottom) Nancy Rumbel, Elizabeth Ward, Doug Miller and Gary Gibson:

"The Credit Roll" (1995) This piece is music for the ending credit roll of an imaginary movie from the golden age of film: Film Noir circa 1948. Somewhat dark, romantic, and melancholy. Nancy Rumbel contributes the oboe solo to go with the custom sampling for everything else:

"Homage Français" (1992) is a piece for flute and sampled harp dedicated to French music of the early 20th century. The piece is constructed in three sections with the center movement having the unusual property of being a cadenza for the harp, not the flute. It was written for sampled harp to allow me to take considerable compositional liberties with chromaticism while maintaining a strong timbral resemblance to its acoustic counterpart. The piece was intended only for the recorded medium and I created the programming for the harp using samples from the McGill University harp recordings, recordings that were many years later sometimes used in Garritan libraries: 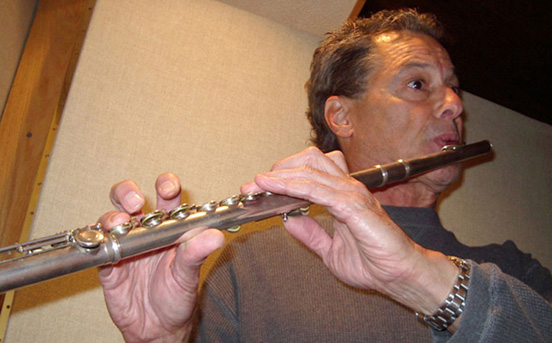 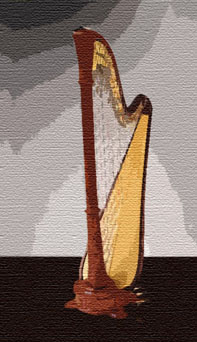 Jim Coile's superb flute playing was featured on "Homage Français". The piece uses a sampled concert harp. The harp music was carefully sequenced to provide the "performance." The harp part was completed first with a temporary sampled flute part. This was later replaced with Jim's real flute performance.

"Twisted Brass" (1994) is a tongue-in-cheek march for brass septet. Trumpets and trombones are performed by me; French horns and tuba are sampled and performed by me. Ha!: 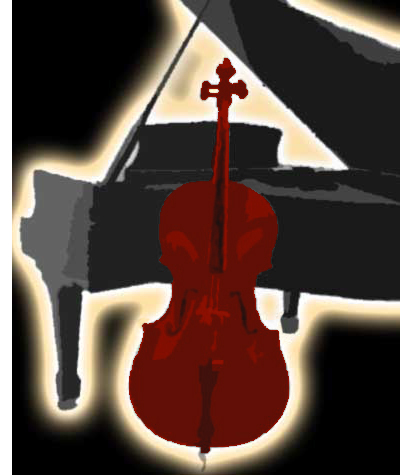 "Entropically Yours: Six Brief Episodes for Sampled Cello and Piano" (2015) - This is a composition for cello and piano that eschews standard musical form conventions to represent localized (and ultimately temporary) reversals of entropy - life itself comes to mind, for instance. The six episodes, which meld together in a flowing entirety, are titled as follows:

This composition uses a Vienna Symphonic Library solo cello and the Garritan Steinway Basic piano. Large portions of the cello part were recorded using the Akai EWI as the MIDI controller for data input, which allowed for highly expressive results: 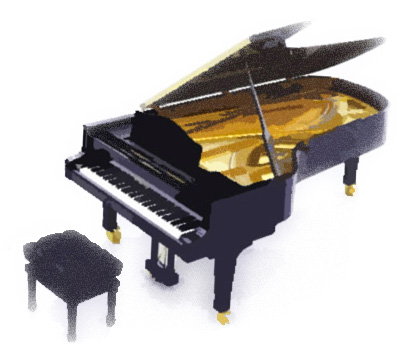 The piano pieces below all used sampled pianos triggered by sequence data. A combination of playing from the keyboard and editing data in the sequencing program produced these pieces of music. All of the pieces except "Miniature Waltz" used one of the best sampled piano modules of the early 90s called the EMU Proformance. The "Miniature Waltz" was recently re-mixed to use the Garritan Steinway piano library.

"Rain Forest" (1993) is a piece from Piano Collection #1. It is in the tradition of water music for piano:

"Circus Demento" (1993) is another piece from Piano Collection #1. This one displays a ragtime influence and an impish sense of humor. Stravinsky lurks in there:

"'Round The Jazz Thicket" (1996) is a "round" for 3 pianos, bass, and, primarily, cymbals. Pianos are sampled, bass is played by Doug Miller, and cymbals are played by Gary Gibson:

"Elegy" (1996) is a composition for piano, synthesis, and percussion with a somber inevitability. Could also have been titled "For Whom the Bell Tolls": 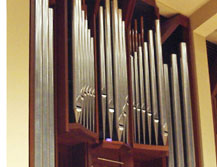 "Organique" (2005) uses the sampled pipe organ I designed for the Garritan Personal Orchestra library. The piece is playful, very free form, and intended to feel improvisational: 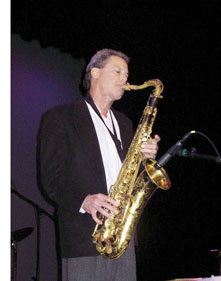 "Doin' The Fleldmeldjer" (1998) was written as a feature for the tenor saxophone of Jim Coile. I supply the trumpet. All other instruments are sequenced and sampled:

"The Rogue" (1998) is a piece for five valve trombones, bass, and drums. The trombones are played and overdubbed by me. The bass and drums are sampled and sequenced:

"Bone Voyage" (1998) is another piece for trombones, bass, and drums. Trombones are again overdubbed by me, the drums by Alan Hashimoto. The bass is sampled and sequenced:

"Walls of Stone" (1998) is a solo improvisation for valve trombone in the reverberant environment of a large stone church. The piece is based on four brief ideas that were sketched just before the recording session (see scan of original sketch below.) I recorded the piece in one take without rehearsal. Obviously, the piece would be radically different for any given performance since only the minimum structure is actually defined: 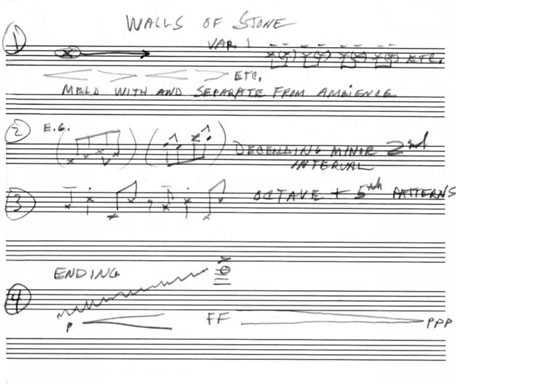 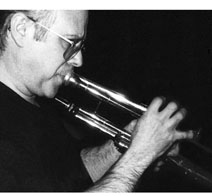 The valve trombone is a natural doubling instrument for a trumpet player because valve patterns are identical. The instrument sounds somewhat different than a traditional slide trombone due to the disparate note transition behavior that results from the contrasting mechanical structures of the two.

"After Hours" (excerpt - 1999) is from an unfinished project of quiet,late-night jazz for flugelhorn, piano, bass, and drums. This section is composed in the tradition of the golden age of American song writing. I'm playing flugelhorn, Mike Jaap on sampled piano, and Alan Hashimoto on drums. The bass is sampled. Flugelhorn became my preferred instrument to the trumpet for many musical situations because of its more mellow tone:

"Midnight Magic" (excerpt - 1998) from a different project - this time with Jim Coile on soprano sax, Mike Jaap on sampled piano, and Alan Hashimoto on drums. All other instruments are sampled:

"Military Industrial Juggernaut" (1995) is a fusion piece for sampled piano, synth, percussion and (as the only element of real humanity) Jim Coile on the soprano sax. All other instruments are sampled or synth sounds. Beware: This recording contains very strong low frequency components near the end that could prove damaging to speakers if played back at high levels. Use appropriate caution. A hint about the ending: Humanity does not survive. It's a cautionary tale: 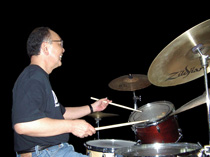 "Synscapes #4; Synscapes #6" (1992) - These next two pieces are from a book of compositions exploring some of the endless possibilities of synthesis. No acoustic instruments are used in these compositions:

"Infinite Refractions for Sampled Strings and Synthesis" (1994) - This piece, in its idealized form, would go on forever without a beginning, a middle, or an ending; it's a musical Möbius strip. It reveals a process whereby any recording is just a glimpse of a passing portion of that process. A nod to Xenakis:

"The Evolution of Dwayne" (2014) - We have here a very unusual electronic music piece (even for me.) The subject matter is an odd combination of sci-fi and humor. Also - are you ready for this? - it is a rare example of voices being used at the Vocal-Free Zone (albeit, just speaking - which, technically, doesn't break the policy of avoiding vocalists. Ha!) I have written both the libretto (narration plus "Greek chorus") and the music. The compositional synth palette is derived from a large variety of software including Reactor5, Rapture, and Dimension Pro. The soprano sax part is played on the EWI using the SampleModeling soprano Sax software and the piano is the Garritan Steinway Basic. Special effects are too numerous to mention, so I won't!

More non-commercial original music can be found here on the EWI page.

All music on this site is copyrighted by Tom Hopkins for Puppies on a Platter Music. All rights reserved. Do not distribute without written permission.