Dressed in latest "mod" fashion for the pit orchestra in 1973. Take note of the Dizzy Gillespie style trumpet that I played for a few years.

I also spent some time around 1973 playing in the Shoreline Community College stage band without actually being enrolled. I did this because it was a fun group of guys playing interesting material. They rewarded me handsomely for being the oldest guy in the band. 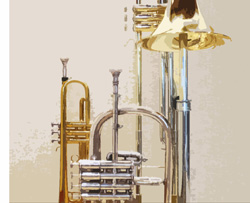 Musical instruments are a part of my earliest memories. My grandmother played an interesting form of self-taught stride piano. She encouraged participation as she played popular tunes of her day and her repertoire was fairly extensive for songs from the 1920s through the early 1950s. She often re-harmonized them in, shall we say, unconventional ways as she improvised her way through them. I think my first fascination with improvisation came from watching her make it up as she went along. My brother and I contributed drums and enthusiastic sing-alongs to the likes of "Yes Sir, That's My Baby!" We had fun and I consider it to have been unintended preparation for what came later. And no sir, I don't mean maybe!

I began playing accordion at the age of four and continued for four years; I performed for family and friends, school, talent shows, and even at a mental hospital, where I presume I made things worse. 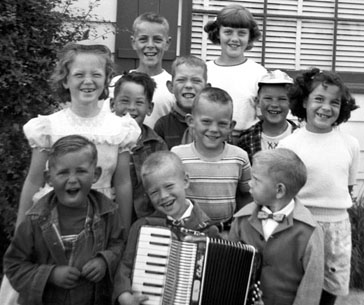 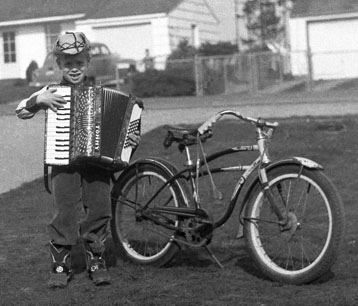 Photo left: Accordion in hand with neighborhood fans. Everyone is having a good time except my brother, in front to my left, who apparently has a vendetta against someone in the second row. Photo right: Just your typical "Cowboy With Bicycle While Playing Accordion" picture.

I began playing trumpet at the age of 10. I received a superior rating (in comparison to what I'm not so sure) at solo contest in the 7th grade while aided and abetted by accompanist Melanie Williams. I was featured in trumpet trios in junior and senior high school. The usual concert band experiences.

Unusual fact: I had the same band director from grade school through graduation from high school: Wally Rants. As I moved from grade school to Junior High to High School his job moved with me in perfect synchronicity. He was a big influence, as you can imagine. To his credit, not many people have been brave enough to follow me wherever I went the way he did; in fact the only other people who share that distinction are all of the other band members in my class and the classes near mine. I think of them as the Several Dozen Exceptionally Valiant Elite . . . but I digress.

I began playing Jazz in the early 60s, which, coincidentally, can be roughly correlated to Jazz' declining popularity in American culture. 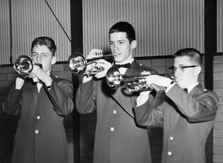 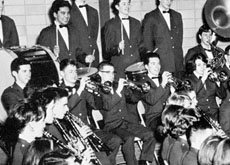 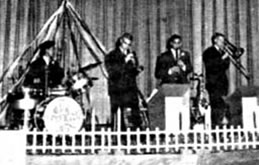 I started playing trumpet professionally at age 15. The location of my very first paying gig burned to the ground soon thereafter but that clear warning shot across my bow didn't stop me - I came back for additional bows. Those early gigs were at things like beauty pageants, conventions, and other social functions.

I majored in music at Olympic College in Bremerton, WA. focusing on jazz and then followed that as an inmate at the University of Washington in Seattle, WA. where our motto was "this too shall pass." Weekends were spent playing in a 40s style big band for dances, weddings, local mall events, etc. 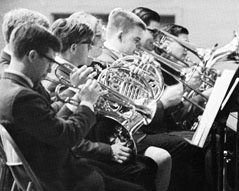 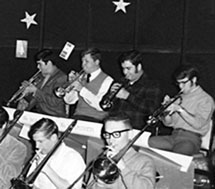 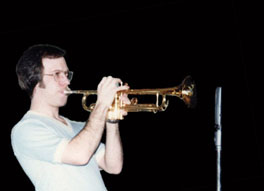 I wrote charts for, and played in, a funk band around 1970. Toured with the Army National Guard Band in the early '70s, and performed with them at many military and public functions (including the Spokane World's Fair in 1974.) The '70s happened to be a time when I was playing in a lot of pit bands/orchestras for locally produced Broadway shows - Oklahoma!, Cabaret, Carnival!, Stop the World - I Want To Get Off, etc. I studied trumpet in New York City with Roy Stevens periodically between 1974 and 1977 concentrating on the extreme upper register of the instrument (see the Trumpet High Notes audio file on The Garritan Corporation page for amusement.) 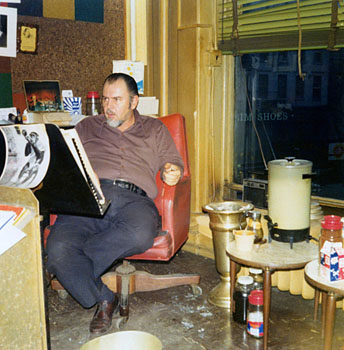 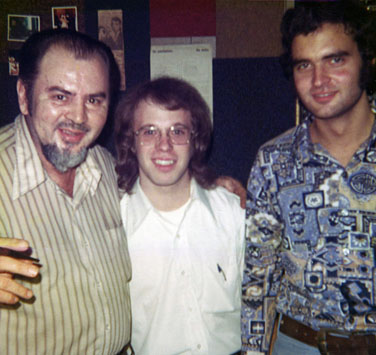 Photo on left: Roy Stevens in his studio at 48th and Broadway in New York City. Photo on right: Roy Stevens, me, and Bud Jackson. Roy knew more about the mechanics of trumpet playing than anyone I have ever met. We would spend hours in his studio watching him analyze and teach students because he believed that we could learn a great deal watching the problems of others being solved. The results were often astonishing. As I look at the above photo, I certainly envy the wealth of shoulder-length hair I possessed at that time! I apparently grew my entire life's quota back then. I should have paced myself.

Added flugelhorn and valve trombone to my arsenal in the early '80s. I played for eight years in the horn section of a blues band that performed at the Goodwill Games in 1990. There were hundreds of random jazz, blues, and R&B gigs that I honestly can't remember very well - a defense mechanism, no doubt, concerning the pay and circumstances of those gigs. We played tunes like: "Pass the Hat If You Want to Get Paid," "How Do You Split $3.85 Six Ways?," "If You Let Her Sing With The Band You Can Find the Horn Section in the Bar," and "The Drummer Gets Louder the More He Drinks." That last tune would invariably get counted off way too fast and get faster as it went along.

My trumpet, flugelhorn, and valve trombone playing was heavily featured in PBS Television productions from the late 80s through the decade of the '90s. My brass contributions were mostly anonymous. I was told that was for my own protection.

I played valve trombone in the Seattle Seahawks band for two years and despite this, they still lost. My favorite occurrence from that time happened one home game when the band members were walking out of the tunnel onto the sidelines to take our place on the bandstand. People were leaning over the stadium railings and some of them spotted us. One of them yelled, "Hey look! It's the band! . . . get a job!!" It's all about respect. 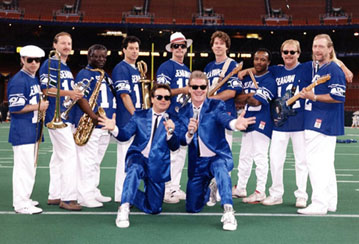 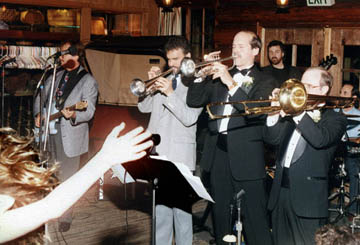 I performed and recorded trumpet, flugelhorn and valve trombone for sampled instruments in Garritan libraries between 2001 and 2006.

Over the decades I accumulated a wide variety of playing experience in many musical genres (classical, jazz, pop, R&B, etc.) The gigging and recording continued, but with considerably less frequency during the busy Garritan years, until arthritis finally curtailed my brass playing entirely in 2009. Shed no tears (unless that's your idea of a good time) because I don't particularly miss playing brass instruments. Instead, I play the following:

I began developing skills on the Electronic Wind Instrument (EWI) in 2008 once brass instruments became exceedingly uncomfortable to play. It shows a distinct weakness of character that I tend to dislike pain and am selfish enough to take steps to avoid said pain whenever possible. "No pain, no gain." I'm OK with that! Silver lining: The EWI actually turned out to be a very good musical alternative. See the EWI section of this site for more information and audio examples. As you can see from the pictures below I still spend a good deal of time in black and white. And in stereo.

I am grudgingly incorporating the category of keyboards on this page because I use the keyboard for composing so, technically, I also play keyboards. I have what is charitably referred to as "composer's chops." This means my keyboard skills are sufficient to use as a composer's tool but you wouldn't want to hear me in any conceivable performance situation, unless it was for laughs.

By the late '80s brass instruments often took a secondary role to my other musical activities (and I was never willing to go on the road as a player nor move to New York or Los Angeles in search of better gigs) but the brass instruments were always present and were foundational to almost everything else I did. It's significant that the EWI has been elevated in my priorities since retirement and now gets lavished with attention. Picture me lovingly pouring rich chocolate sauce all over it and licking it clean. On second thought, don't picture that.