Subwoofer cabinet structure as seen with the bottom up.

Assembled, filled, and sanded system. the silicone damping can be seen on the interior along with the sealed tweeter chamber with recessed routing for flush mounting of the tweeter.

The upper cabinets during the application of black spray paint.

Finished system view #2. Note the radiation space between the carpet and the bottom cabinet. Also note the crossover chamber attached to the back of the subwoofer cabinet. 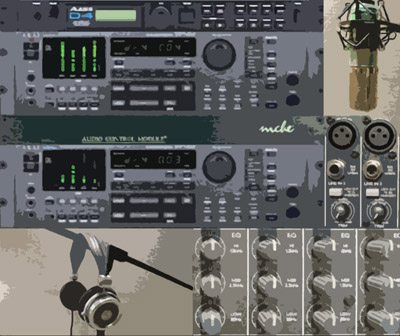 My work in audio electronics was always on a parallel path with music - separate but parallel. That is, until the two paths merged in the '80s to become different aspects of the same activity. The skills in both areas were complimentary and interactive. It became clear that these intertwined skills provided an advantage to me over those who had considerable abilities in either music or audio, but not both.

One thing that must be understood about a great many of the projects described on this website is that I have always been inclined to custom design and build to my own needs. This included audio designs for a variety of purposes and also woodworking/cabinet construction. Occasionally, I will be using the word "custom" in a description: Now you know what that means.

Before I begin to list my activities in audio here's a fundamental piece of important information: You didn't want to be an electronic device around me when I was young - I would disassemble you to see how you worked. Disassembly was easy, the trick was successfully putting things back together in working order - my percentages were high but not without casualties. Phonographs, radios, televisions, and tape recorders were among the equipment that fell prey to my explorations. These unfortunate devices would actually squirm when they saw me entering the room.

What, When, and How

There is so much chronological information to list in this section that I am going to take this opportunity to uncharacteristically write in clipped and fragmented sentences! Deep breath, here goes:

The Zoom r16 was my primary field recorder for several years until I no longer needed a field recorder. It is compact and convenient. It also has the ability to record up to 8 tracks at a time onto an SD card while monitoring and has a bevy of mixing features (which I rarely use since I export the raw tracks to the computer for editing and mixing.) Sound quality is excellent. Out of curiosity I tried to list the cost of equipment I would have needed 20 years ago to duplicate the capabilities of this little $400 wonder. I stopped counting at $35,000. 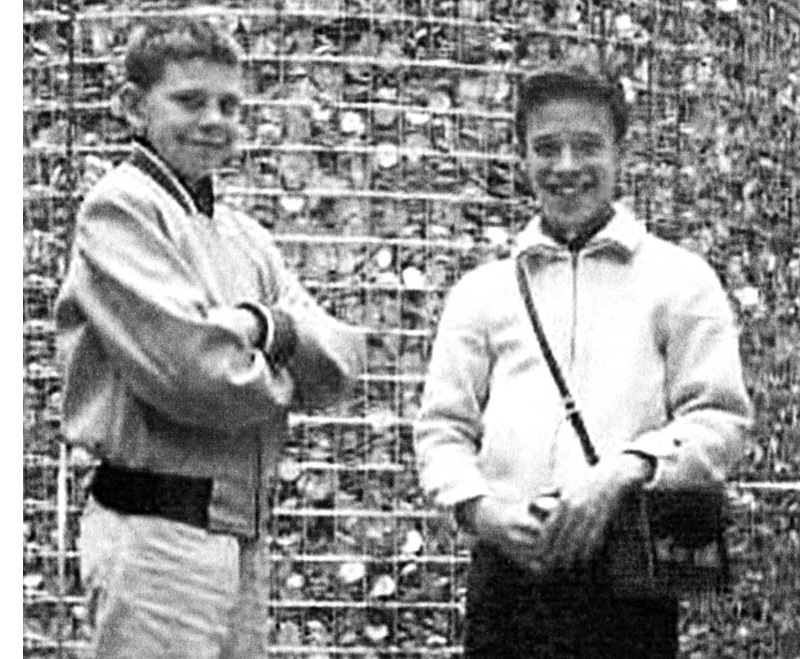 *1 1962 World's Fair. This excerpt was recorded with an AIWA portable tape recorder running at 1 7/8ips with a small dynamic microphone. The condition of the tape has deteriorated badly over the years and the quality of the sound was pretty awful to begin with but it's a fascinating document from 50 years ago! This selection was recorded in the House of the Future exhibit. I chose the excerpt because this part of the exhibit looked "into the future" of home technology (beyond the distant year 2000) and the guesses were remarkably prescient in conception if not in the details of just how things would come about. These prognostications included home projection television, personal video recorders, home computers, online banking and magazines, etc. It's also amusing to hear the very 1950s slant on male and female roles - we certainly lived in a world of confined expectations back then - "good old days" indeed. Roll your eyes and snicker at will. The photo above shows my younger brother Rick and me, with recorder slung over my shoulder, standing in front of one million silver dollars or, as we affectionately called it, "pocket change":

*2 High School Band - Director: Wally Rants. This is a Christmas concert excerpt. Recorded with the monaural Butoba portable at 3 3/4ips using the dynamic microphone that came with the recorder. I'm in the band so my mother is being indulgent enough to press "record" and "stop" for me. Her patience sometimes reached a limit with comments like, "Oh Tommy, put that thing away, you don't have to record everything." Fortunately, I didn't take her advice and can now hear her voice (and many others' long departed) anytime I wish:

*3 See 1969 skit on Compendium of the Strange and Unusual page (consider the decision to listen to this one carefully, it could spoil your whole day.) 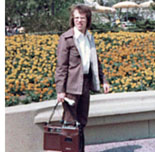 *4 1974 - Disneyland - Taken from the many hours of material I recorded in Southern California that year including these Disneyland clips. This uses a Sony Stereo portable cassette recorder with Dolby Noise Reduction and a Sony stereo electret microphone. The recording quality is excellent and very vivid, especially over good headphones. I've included two clips: One of the Disney band on Main St., and one of children on Tom Sawyer's Island with a Dixieland band passing on the river boat. How odd to realize that those little children heard enjoying themselves in this recording are now nearing 50 years of age! Not a pleasant thought: 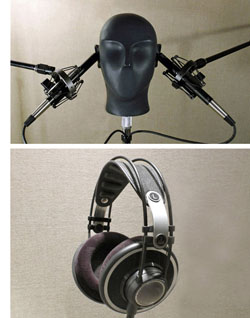 *5 1993 Binaural- I created the following recording for friends as a demonstration of the remarkable verisimilitude possible with binaural recording. It requires the user to wear superb headphones or earbuds to fully experience the effect. The effect cannot be achieved with speakers of any kind. Set the volume level to be as natural as possible for the distances that are being identified by me as I talk on the recording - use your intuition. Under the right conditions this recording can be uncannily realistic to thesides, behind the head and above - it can give the illusion that events from 20 years ago are happening around you right now! Recorded with a binaural head, AKG460 cardioid capsule mics pointed into the binaural head ears and then recorded directly to Digital Audio Tape. Most binaural heads incorporate the microphones into the ear canals of the head. That's the purest way of recording binaural sound but the external method I used is still very effective. I named the binaural head Eric (ear ache):

The Design and Construction of a Reference Studio Speaker System 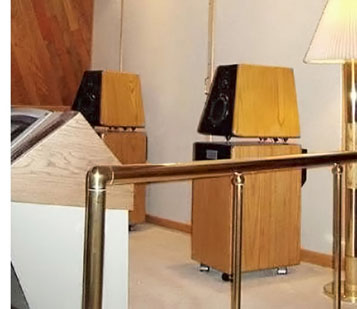 The most advanced speaker system I designed and built over the years was a three-way dynamic reference studio monitor for the Vocal-Free Zone in 1994. I incorporated virtually everything I had learned concerning speaker design, much of it borrowed from the best commercial designs of the time. I mixed many ideas together into an unusual speaker system of remarkable prowess. The resulting system was neutral in signature, extended in range, and excelled at producing precise imaging with a wide, very deep soundstage. It was my main studio workhorse for over 15 years and truly was reference quality. I never felt the desire to replace it with a commercial system of any kind – it was that good. I retired it when I retired. It now lives happily at another musician's home. I still get a card from it at Christmas.

What I'm going to do here is describe how this system was built, a process that is definitely not for the faint of heart! First, let me point out that this article is not a detailed step-by-step on how to build such a beast; it's just an overview to show what the goals were and how I constructed it. To be clear: I'm not including crossover circuit schematics, a materials list, or dimensions . . . but the information is really, really interesting if you have ever wondered how something like this could be done.

The primary technical goals included: Extended, extremely linear amplitude response (an honest 20hz to beyond the audible spectrum within a couple of decibels;) linear phase response over as much of the spectrum as possible (on general but unnecessary principles I wanted it to pass a recognizable square wave;) copious output (play louder than I could stand to listen;) minimal edge diffraction, cabinet resonances, or internal interference modes; and nicely finished - just because.

Each side of the design consisted of two cabinets. The top cabinet was a two-way design that handled frequencies from 80hz on up. The lower cabinet (upon which the upper cabinet sat) was the subwoofer section which handled frequencies from 80hz on down. The entire system, therefore, acted as a complete 3-way system. Both top and bottom cabinets were sealed designs. All drivers were sourced from Dynaudio. The top cabinet crossovers were passive, linear phase, 6db/per octave configurations which, in conjunction with the time-aligned positioning of the drivers delivered nearly linear phase response across the full operating range of the system. The drivers were specifically chosen to handle the enormous wide bandwidth demands of these lower order slopes. The subwoofer crossover used a passive linear phase 18db/per octave design which ensured that frequencies beyond its intended range were effectively suppressed. The subwoofer design also used a dual push-pull downward-firing driver arrangement which was intended to be pointed at a carpeted floor; the carpet aided in the acoustical suppression of unwanted higher frequencies so the upper frequency rolloff was actually steeper than strict calculations would predict. The push-pull arrangement of the subwoofer drivers was engineered with the drivers facing one another and wired out of phase with respect to each other – thus causing the cones to move in unison pistonic action. The air trapped between the two driver cones bolstered the cone stiffness; the drivers' waveform nonlinearities at maximum voice coil travel were inverted in phase with respect to one another, so 2nd harmonic distortion was effectively canceled; and twice the magnetic motor force was applied to the large enclosed volume of air in the cabinet, lowering the system resonance point and, thus, extending the low frequency cutoff point to reach the bandwidth goal for the cabinet size. The crossovers were placed in a separate chamber at the outer back of the subwoofer cabinet, isolating electronic components from any internal air pressure changes caused by driver motion. All crossover components and wiring were carefully chosen and tested using the finest parts available at the time. Critical portions of the crossover circuitry were made adjustable so that the design could be “tweaked” during the final phase of testing and refinement, which included long and careful listening sessions once measurement goals had been confirmed. Ears were the final arbiter of success. In this case at least, measurements and ears reached the same conclusions. It wouldn't have been pretty had things degenerated into a huge disagreement between the two. If the disagreement had actually ended up in court I suspect it would have been called a hearing hearing.

The functions of the speaker cabinet were manifold. It needed to be as inert as possible, contribute minimal internal standing wave resonances, and effectively compliment the function of the speaker driver by determining, as a system, the point and rate of driver response roll-off. Ideally, in a sealed enclosure design, only the drivers should be radiating energy into the room, not the enclosure walls. The cabinet should also minimize diffraction effects on the exterior front surface to avoid secondary wave propagation disruption while also time-aligning the voice coils of the different drivers with the ideal backward slant (relative to the exact intended listening position.) The photos in the sidebar to the left reveal the construction techniques used to approach these goals. Note the following: