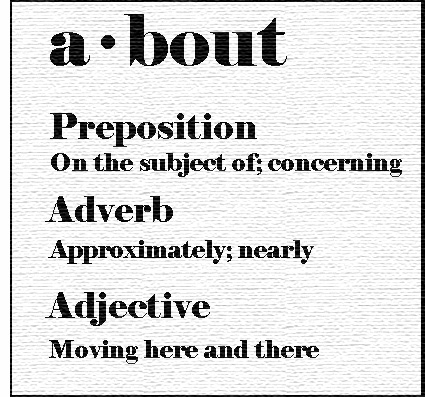 It seems no website is complete without an entire page devoted to "About." This subject is so far-reaching in its implications that it stretches one's imagination into uncharted areas of thought. And I have more uncharted areas than most.

So first, a little history is in order: The word "about" began at 9:47am on a Tuesday, the exact date of which has been, unfortunately, lost. It initially referred to the anticipation of retching as in, "Wow, in the vicinity of 9:22 I started to feel a bout of the flu coming on." This evolved into any reference concerning the beginning of something unpleasant as in, "I think it's about time I mowed the lawn." Eventually, the word's negative connotation carried over into Holiday celebrations in Italian communities of the "Chico Marx" clan. Evidence of this is still visible in the lyrics of some old Christmas songs. Example: "You better not a-shout, you better not a-cry, you better not about, I'm a-tellin' you why . . ." The Canadian distaste for footwear brought about the pejorative pronunciation "a-boot," first appearing in "Aesock's Fables."

So, now you know about all there is to know about "about" and this knowledge should leave little doubt about why "about" is nearly mandatory on something as unpleasant as a pointless website (like this one.) Which reminds me, the word "nearly" is showing definite signs of supplanting the adverb form of the word "about" as a favored webpage subject. Well, it's about time, I'd say - and that would be, of course, 9:47am. On a Tuesday.