Garritan sample libraries were designed to aid composers and others involved in music production - students and professionals alike. One of the immense additional pleasures (for those of us designing these tools) was observing the astonishingly creative application of the technology to aid in bringing the first-hand joy of creating music to those who had never experienced it. The story below describes just such a remarkable use of the sample libraries we produced. Tom Hopkins

Sample libraries and software instruments are providing new benefits that are truly amazing! Software sampled instruments combined with the latest music technology are enabling people with disabilities to play and compose music independently. The Drake Music Project Scotland based in Edinburgh, Scotland provides such opportunities and resources to support their nation's disabled community in realizing the same musical aspirations as their non-disabled peers. "Advances in music and sampling technology over the past few years have been astounding" says Brian Cope, Artistic Director of Drake Scotland. "People who would otherwise be unable to play or compose music are suddenly awakened to their innate musical selves."

Recently Drake students performed in concert with musicians from the Royal Scottish National Orchestra (RSNO) Big Band. This concert combined RSNO musicians playing acoustic instruments and disabled people playing samples. Drake participants had the opportunity to play along with the RSNO Big Band using the sax sounds of the Garritan Jazz and Big Band library played using the Soundbeam and switch technologies. The live performance took place in Glasgow in November. Here are some photos of the event: 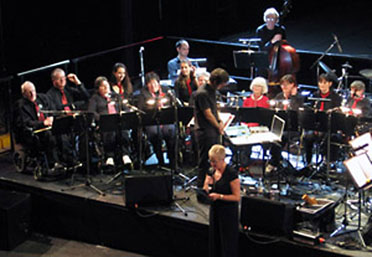 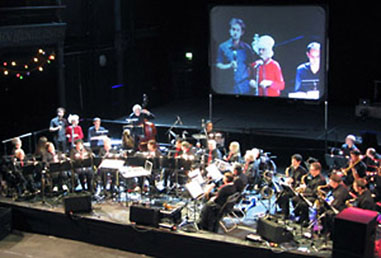 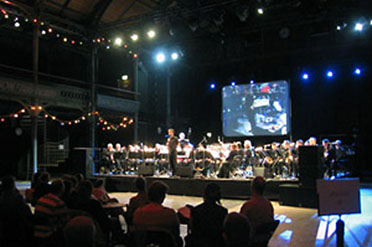 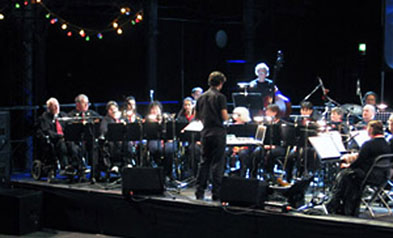 Having a disability does not stop Rhona Smith, an 18 year-old woman with cerebral palsy, from realizing her dreams ... to make music. Rhona has been involved with Drake Scotland for a number of years and uses a piece of software called E-Scape which was developed for the Drake Music Project in the 1990s by Dr Tim Anderson. E-Scape basically provides single or multiple switch users with a computer program that enables them to compose and perform music independently (similar to the way in which the scientist Stephen Hawking uses limited movements to communicate through speech). E-Scape combined with the Stradavari Solo Violin has opened up the possibility for Rhona to access pieces of music from the vast violin repertoire. By using pressure sensors, Rhona can control the notes using a single switch and use muscle pressure to control expression and vibrato.

Here is an MP3 of a Rhona playing the Massenet piece using E-Scape. 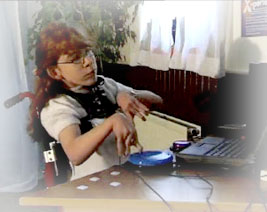 Another exciting piece of music technology being used at Drake Scotland is called Soundbeam. Soundbeam is an ultrasonic movement detector that analyzes the movements of a player's hand, fingers, head or whatever physical movement they have. This movement is then converted into midi data which is used to send note information.

Recently, Drake Scotland ran a training session for instrumental teaching staff that demonstrated the Soundbeam system. Members of the instrumental staff improvised a Soundbeam String Quartet featuring solo string sounds from Garritan Personal Orchestra. The beams were programmed at a length of 1 meter with a series of pitches which are played by moving a hand up and down within the range of the beam. The beam has a range of 56cm to 6m and can therefore be programmed for people with a limited range of motion to transform even the small movements into musical notes. Here is an mp3 of Brian Cope trying out the Stradivari Solo Violin. In this piece he is controlling note changes by moving his hand in the beam and is controlling expression and vibrato by squeezing pressure sensors, one in each hand:

Here's a video demonstration of the "Soundbeam String Quartet":

"Being able to play an instrument in real time with an accompaniment has opened up a whole new world of musical possibilities!" says Brian. "And there are so many exciting projects being developed over the coming months. We are always investigating new technologies that will give our participants the most control over Garritan Libraries”.

The latest piece of technology about to be tested at Drake Scotland is called "Brainfingers", Cyberlink hardware and Brainfingers software allow you to control your computer totally hands-free. You wear a Cyberlink headband which detects electrical signals from your facial muscles, eye movements, and brainwaves.  The Brainfingers software decodes these signals into virtual fingers or Brainfingers which trigger mouse and keyboard events to control third party software. Brian says, “If all goes well with Brainfingers, musicians like Rhona will be able to control musical events with their thoughts alone unhindered by their physical disability.”

We often take the ability to play a musical instrument for granted but there are those who will never be able to even hold an instrument let alone play one or participate in music groups. There are many people who have had strokes, or have cerebral palsy or other physical or learning disabilities who should have the opportunity to participate in music making. And many of these may have musical talent latent within a body which does not cooperate or may be musicians who have lost the capacity to play an instrument they once excelled at. (e.g. the trumpeter, Clarence Adoo)

People who never imagined making music are now doing so and learning, composing and playing in ensembles. "Making music in a group is one of the things that people of all abilities really enjoy" says Brian Cope, "and what we are doing gives people the opportunity to do that."

Software instruments combined with the latest music and sensor technology are enabling people with disabilities to experience the joy and life enrichment that participatory music making provides. It's people like Brian Cope and his colleagues at Drake Music Project Scotland that stress the "ability" in disability. Drake Scotland is making a significant positive impact on the quality of life for musicians with disabilities all over the world.

You can find out more about the Drake Music Project Scotland at their website www.drakemusicscotland.org If you would like to donate money, instruments, software or moral support I urge you do so.

Thanks to Gary Garritan for granting permission to host this important page.